HomeArticlesMoneyTalksSpinning for a Fight 30 Years After

Spinning for a Fight 30 Years After

Many among us like to say negative things about others. Way back two thousand years ago, Roman historian Titus Livius (BC 64 – AD 17) had the talent for it. He loved to make Romans look good and their enemies look bad.

For instance, he claimed that Gauls were unreliable and lazy people, the Greeks were savvy but slimy people, and the Carthaginians were cruel, cunning and deceitful. But the aim of Livius’s misinformation or propaganda was not because he disliked non-Romans. His aim was to support Emperor Augustus who had recently united Rome after a long civil war.

So, whenever we come across statements or surveys about the negative things people think of others, we must bear this in mind – it’s human nature to think less of others.

A few days ago, the US-based Pew Research Centre announced their latest survey on how others viewed a few China issues in the June to August 2020 period. The short answer is that more of the non-Chinese respondents in the survey viewed many China issues more negatively than before.

In any survey, whether they be for social or economic objectives, there are many weaknesses inherent in the methodologies. This survey has it too. But we won’t go into them here.

It is laughable because I mentioned earlier that human nature likes to think less of others compared to ourselves.

Since the survey was conducted a few months ago, Covid-19 infections have climbed up again, especially among the countries where the respondents were surveyed. The graph below shows this. 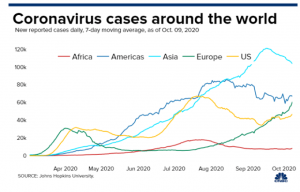 It is laughable because China has just finished a fairly busy Golden Week of holidays with lots of people moving about, whereas many countries the survey respondents came from are facing another lockdown.

Despite the weaknesses of surveys, they are supposed to give us a sense of what’s happening. But many surveys have more sinister objectives for the war propaganda machine.

In the twentieth century, when we think of war propaganda, Nazi Germany’s Joseph Goebbels come straight to mind. He is responsible for persuading most Germans to hate Jews and convince them that mistreating and exterminating Jews were acceptable behaviour. 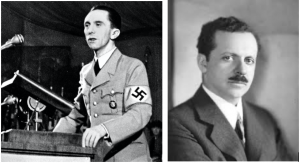 The truth is rather surprising. Apparently, Goebbels admired the work of an Austrian Jew by the name of Edward Louis Bernays. Born in 1891, Bernays was the nephew of world-famous psychoanalyst Sigmund Freud.

Bernays was a very secretive person. What we know was that in his mid-twenties, he and many talented mind-control scientists, worked for US President Woodrow Wilson (Mar 1913 – Mar 1921) in the Committee on Public Information (CPI), the newly-created US war propaganda agency.

At that time, President Wilson wanted to get the US involved in the First World War (1914 – 1918). But American opinion was against the war. So CPI was created in April 1917 as a propaganda tool to convince Americans to be involved.

Within a few months, such horrible stories convinced Americans to join the war. To many admirers, CPI was a resounding success. It was the first truly scientific vehicle to manipulate and control the perceptions and beliefs of an entire population.

Right after 1918, Bernays used his war propaganda experience for commercial purposes. His strategy was to create events. The events created news. And the news created demand for whatever he happened to be selling.

This was a revolutionary approach. Before Bernays, business advertising was straightforward – just tell customers the benefits of the products and their prices.

For instance, Bernays managed to get women to smoke in the late 1920s by convincing them that it was a sign of their liberation, and that cigarettes were also soothing to the throats and good for their waistlines. His client was the American Tobacco Company.

Bernays wrote his famous book (Propaganda) in 1928 on why public relations is not a gimmick but a necessity. This book is still seen today by many as the Bible of Public Relations. 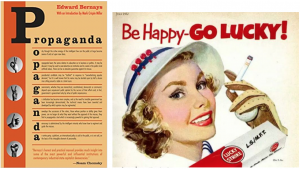 Besides writing the reference book on public relations, Bernays broke many marketing barriers for his customers after 1918

It is this seminal book (Propaganda) which caught the eye of Joseph Goebbels in 1933 and triggered his deep admiration for the effective brain-washing methods used by Bernays.

When Bernays found out that Goebbels was using his methods, he was appalled. But that didn’t stop him from helping the Central Intelligence Agency overthrow the socialist government in Guatemala in 1954. His client was the United Fruit Company, and the aim was to secure their profitable banana plantations in Guatemala.

Edward Bernays died in March 1995. His ideas and methods have been used by armies of politicians and public relations people to shape the world as they see fit. When he was 99 years old, Bernays witnessed the best example of his methods.

In August 1990, Iraq under Saddam Hussein invaded Kuwait. US President George H W Bush wanted the US military to intervene. Like in the First World War, Americans didn’t want to be involved.

So, exactly thirty years ago on 10 October 1990, a 15-year old Kuwaiti girl named “Nayirah” appeared and testified before the US Congressional Human Rights Caucus. Nurse Nayirah said tearfully that she saw Iraqi soldiers take babies out of their incubators and left them on the cold floor to die. 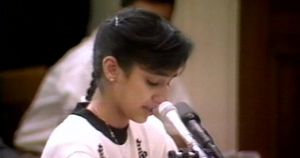 Nurse Nayirah testifying about the atrocities committed by Iraqi soldiers

The problem was, in 1992, it was discovered that Nayirah was actually the daughter of the then Kuwaiti ambassador to the US. She was never in the Kuwaiti hospital. Her story was fake and she was coached to say what she said.

It was a US$12 million propaganda spin funded by Kuwait and organised by PR firm Hill and Knowlton. The politicians used the story for their own aims, and the mainstream media helped spread and reinforced the fake news.

But tell that to the hundreds of thousands of Iraqis, and the thousands of Americans who have suffered in the past 30 years, thinking that they were doing something worthwhile for their sides.