“For King and Country” is now “for Human Rights and Democracy”

Slightly more than a hundred years ago, in the summer of 1916, one of the deadliest battles in human history began. This is the Battle of the Somme in the First World War.

The first day of the battle in July was especially horrifying because the British lost some 60,000 soldiers. Most of them were slaughtered by a new weapon we now recognise as the machine gun. It could fire up to 400 rounds per minute and is equivalent to 100 advancing soldiers with rifles.

To overcome the dreaded German machine gun, British military tactic then was to throw even more soldiers against it. Hence the needless slaughter of British soldiers at the Somme.

The irony is that an earlier version of the machine gun, the gatling gun, was used very effectively by British imperial soldiers to slaughter indigenous warriors in the 1879 Anglo-Zulu War. 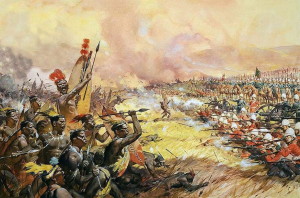 So why didn’t the British army high command, unlike the Germans, embrace the machine gun when it was first introduced to them before the First World War?

The answer to this question is as old as the unstoppable rise and fall of nations. To this we must add some spade loads of plutocracy (government by the rich) and cronyism (appointments without proper qualifications).

In the few decades before the First World War, European imperialism was at its peak. Europe was ruled by a few royal families who had most of the wealth. The middle class was nothing to speak of. The poor were the majority. In an economic system of plutocracy, with so few rich around, cronyism easily took hold.

The first wave of imperial generals was brilliant in waging their colonial wars. But the norm after that was to appoint key military officers through heredity, family, age, connections or horsemanship.

Intelligent soldiers who could ask pertinent questions were not entertained. In fact, intelligence was a positive disqualification. As the world developed and evolved, new problems arose which were beyond the mental capacity of many of these generals.

And so this nice arrangement of plutocracy and cronyism led to the subsequent slaughter at the Battle of the Somme. Today we look back at such situations as an act of supreme stupidity. Surely, we have learnt, we think to ourselves.

Unfortunately, stupidity which allows plutocracy and cronyism to appoint the wrong person for the job, is not an insignificant factor in human affairs. Stupidity is still found everywhere today, in the political and corporate sectors, and even in our homes.

Here’s one example. A few months ago, President Trump’s niece, Mary Trump, released her memoir about the President. In it, she was clear that Donald Trump was not qualified to be President. When Trump won the election in 2016, Mary wrote:  “I grieve for our country.”

Of course, it is unfair to say that President Trump created the US plutocracy. The responsibility lies squarely on the US Fed’s money printing machine and the free-market philosophy under the watchful eyes of US Presidents since Ronald Reagan.

To seal this US plutocracy tight, since 2010, it has been perfectly legal for anyone to spend unlimited amounts of money on advertisements and lobbying groups to advance whatever interests and candidates you wish. 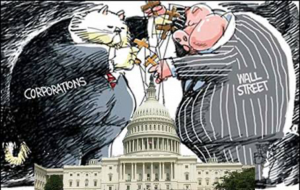 In a plutocracy, power is influenced by the wealthy

So what we have today is what we saw a few days ago.  And that is the ugly sight of two senior US politicians quarrelling like pubescent teenagers over who is better equipped to be the next US President.

Other than the visual scuffle we saw on television a few days ago, the common men suffer when the right persons are not in the key jobs. For the US, many believe that Trump contributed largely to more than 7.5 million Americans to contract Covid-19 and 213,000 to die.

Like in the First World War, ordinary British soldiers died when the wrong people held the key military positions.

The outlook for the world is not good. Most studies show that global income inequality allied to plutocracy is a growing trend.

Assuming that this greater inequality trend is here to stay, it probably means that the world will continue to be led by the wrong people. In wars, soldiers will die. In health, the weak will be sick. In economies, citizens will suffer. In investments, shareholders will lose money.

Of course, it is unfair to say that all plutocracy and cronyism are bad. They can be good. But their good periods by well-meaning and talented founders don’t last long.

The plutocracy story does end. Towards the end of the First World War, ordinary Europeans became disenchanted with their lot. They realised their war contributions do not benefit them, and their leaders were grossly incompetent.

The Russians soldiers were the first to revolt in February 1917. Before long, other Europeans followed. Soon, the old European aristocracy and the new capitalists were all swept aside. 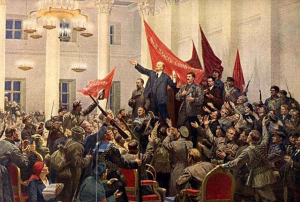 Lenin declares victory for the Revolution in 1917, painting by Sokolov-Skalia

One lesson learnt is that people are easily manipulated. When enthusiastic Britons joined the war in 1914, they believed that they were doing it “for King and Country”. Ditto for the other European workers.

Today, the ruling elite wants us to believe that we should do it “for Human Rights and Democracy” to preserve the system. Be careful.