HomeArticlesMoneyTalksUsing All Means To Stay On Top

Using All Means To Stay On Top

A few days ago (17 Sep), the World Trade Organisation (WTO) ruled that the imposition of tariffs on Chinese exports by President Trump’s administration was in violation of WTO rules.

Since the WTO is an international institution which the US helped to create in 1995, the US has breached its own principles. To many, this hypocrisy is not surprising.

One benefit of this trade war, as far as President Trump is concerned, is that there has been a fall in the US-China trade deficit, as the graph below shows. 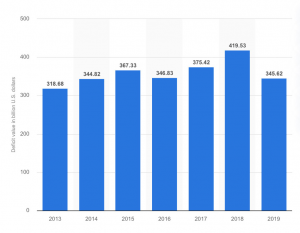 US trade deficit with China fell a bit in 2019

But it is a costly benefit. A Sep 2019 study by Moody’s Analytics revealed that the trade war, up till last September, had cost the US economy more than 300,000 jobs and shaved off more than US$600 bn from the US GDP. And this was way before Covid-19 hit the world.

Besides starting the trade war with China, the US has also been up to its usual tricks of irritating China. These come in many forms.

Some notable ones are raising democracy and human rights issues in Hong Kong and Xinjiang, renewing contested issues in neighbouring Taiwan, Thailand, and the waters in the South China Sea.

To say that it is all President Trump’s fault is incorrect. Successive US administrations have always been determined to stay on top of the world, whether by fair or foul means.

China’s manufacturing output overtook the US around 2010

In 1985, Japan was given this treatment with the Plaza Accord. The results were not immediate. But Japan soon went into a tailspin which it is still trying to recover.

It was President Obama who started the face-off with China in 2012 with his “Pivot to East Asia” regional strategy. On paper, it’s supposed to strengthen security alliances, expand trade and advance democracy and human rights in East Asia.

But sceptics see it as a tool to weaken and divide China so that the US could continue its hegemony in Asia.

One good question to ask is why would anyone accept this high- handedness from the US administration? Why did Japan accept the Plaza Accord? In the real world, there are no gentlemen. Might is right. Japan couldn’t object to the US bullying because it had no military body to fall back on.

China is in a similar situation, at least until recently. As a weak country, China had to turn the other cheek when slapped. I give you two examples. 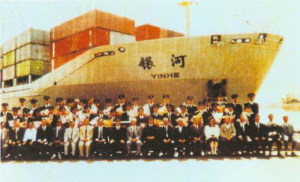 An official photo of the Yinhe when it was commissioned

On 7 July 1993, a Chinese container ship (Yinhe), laden with goods, set sail from Tianjin for its regular destination in Kuwait. Before it could arrive in the Persian Gulf, the US Navy harassed and isolated it in international waters of the Indian Ocean for 24 days.

That’s because the US administration thought that the Yinhe was transporting chemical weapon materials to Iran. Eventually, the Yinhe was allowed into a port in Saudi Arabia. There, US military personnel spent many days inspecting the ship. This included opening up all the 628 containers on board the Yinhe.

No chemical weapon materials were ever found. Despite that, the Chinese shipping line operating the Yinhe was not compensated for the commercial losses. And no apologies were given to China.

Jiang Zemin was the President of China then. He had no choice but to eat humble pie over this. Unfortunately, that serving was not enough.

A few years later in early 1996, Jiang Zemin had another serving of this American humble pie. It was during the Third Taiwan Strait Crisis, when both sides routinely fired missiles at each other as a show of strength.

China fired three missiles at Taiwan. The first missile landed precisely 18 km from the Keelung military base, as a warning. But the second and third missiles got lost.

Eventually, China learnt that their missiles went off course because the Global Positioning System (GPS) which the missiles relied on had been switched off by the Americans who owned and operated GPS.

That’s when the humiliated Chinese leadership realised the vulnerability of relying on the American GPS. Fast forward 24 years to 23 June 2020, and we learn that the 55th and final satellite for China’s Beidou Positioning and Navigation System (BDS) has been installed. BDS is fully operational now.

Like the well-known GPS, BDS has many uses. Besides helping our smart phones and drones get us around, BDS also offers the People’s Liberation Army a more advanced navigation system to direct its formidable array of hypersonic and ballistic missiles. 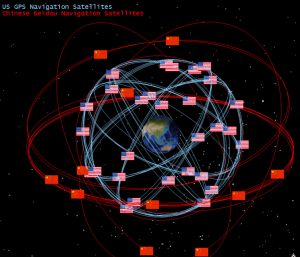 Besides consumers, BDS also gives the PLA an edge

In a sense, with BDS, no Chinese President need to eat humble pie anymore. In another sense, it has become a bit more dangerous for onlookers in this new Cold War. It’s because China is in the position to retaliate.

This Cold War has escalated into the business arena. This Sunday (20 Sep 2020), the US government is scheduled to stop Americans from downloading TikTok and WeChat. The move is an indirect attack on the Chinese leadership, which was formed in July 1921 to bring China together, and which achieved some of its goals on 21 Sep 1949 when it unofficially declared victory over the Kuomintang.