HomeArticlesMoneyTalksDoing a Coca-Cola in the South China Seas

Doing a Coca-Cola in the South China Seas

Seventy five years ago this weekend, the three dominant leaders of World War II came together to decide how to administer the defeated German nation. This was the Potsdam Conference (17 July to 2 August 1945).

Besides the main German issue, the agenda included many other post-war issues. One of these issues was the sovereignty over the group of South China Sea islands that Japanese forces captured from the Chinese and occupied in WWII.

At the end of the Potsdam Conference, it was agreed, in signed documents, and in front of witnesses, including Chinese leader Chiang Kai-Shek, that the group of islands, including the Paracel Islands, the Scarborough Shoal and the Spratly Islands, would all be handed over to China. 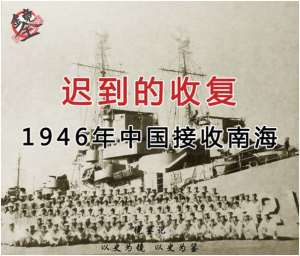 In 1946, China was too poor to even have a large enough ship to transport her soldiers. In the spirit of friendship, US warships transported Chinese soldiers to the Spratly Islands, as the above photo shows, to claim territories that the Potsdam Conference agreed upon.

In 1947, China drew up a map (below) with 11-dashed lines around the island territories to mark its sovereignty. 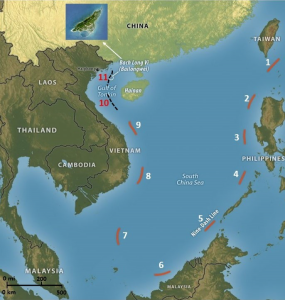 The 11-dashed lines were then reduced to 9-dashed lines. What happened was in 1957, when China and Vietnam were communist buddies, China gave the island of Bailongwei to Vietnam in the Gulf of Tonkin. It was China’s contribution to North Vietnam’s war against the United States. China has never claimed Bailongwei ever since.

With that move, only the famous 9-dashed lines, bordering China’s claims, remain. In recent years, disputes have arisen over who owns what and where. The following map shows the competing claims. 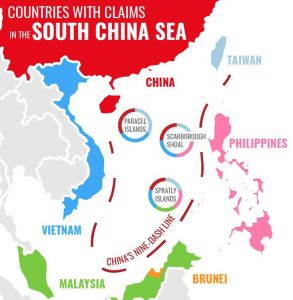 Wait a minute. We scratch our heads and ask: if the 11 or 9-dashed lines bordering China’s territories had been agreed at Potsdam in 1945, why is everyone still arguing over the ownership?

It depends on how far back we want to go back in history. It’s very similar to a messy divorce when we have to decide how child custody should be managed, how alimony should work, and how assets should be divided. As new characters enter the scene, complications worsen.

The South China Sea issue is no different. In 1949, Chiang Kai-Shek retreated to Taiwan and the new leadership of Mao Zedong flew the communist flag in mainland China. The US didn’t like that.

In September 1951, there was a multi-nation conference named the Treaty of San Francisco to re-establish peaceful relations between Japan and the world. China was not invited to the conference because people couldn’t agree whether Taiwan represented China.

Of course, China protested. But China’s protests fell on deaf ears. The world we live in tend to ignore the cries of those who are weak economically and militarily. Like Mao Zedong said, “political power grows out of the barrel of a gun ( 枪杆子里面出政权 )”.

Fast forward another 70 years to today, and the issues over the South China Seas continue. The stakes have gone up because in recent years, significant natural resources have been discovered in the region.

A few days ago, US Secretary of State Mike Pompeo made it even messier by stating that China’s claims were unlawful. He was referring to a controversial United Nation Convention of Law of the Sea (UNCLOS) statement in 2016.

There are three weird responses to this reference. In the first place, UNCLOS has no right to rule on sovereignty. It is up to another global court to decide (Court of Justice). The second weird response is that the US government has not officially approved the United Nation Convention of Law of the Sea yet.

The third weird response is that UNCLOS was formed in 1994, 47 years after China first drew the 11-dashed lines. Normally, international laws do not apply retroactively. In other words, we cannot apply a new law to a past event.

If we did, then the peoples of Hawaii, Guam, Diego Garcia and the native Indians of North America could ask for their lands back and seek compensation.

What Mike Pompeo was doing last week was what he does best. He was trying to push through his alternate view through repetition. A lot of times, repetition of a statement does lead people to believe that the statement is the truth.

In July 1831, a man was born who seem to have benefited from such repetition over the years. He is John Stith Pemberton. In most literature you dig up, he is supposed to be the founder of the famous beverage Coca-Cola. The truth is very different.

Coca-Cola, originally called Kola Coca, was actually invented in a Spanish town called Aielo de Malferit around 1880. It was already a famous soft drink beverage globally before John Pemberton came across it. 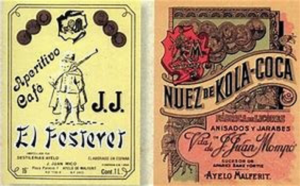 What happened was that Mr Bautista Aparici, one of the Spanish founders, went over to a trade fair in Philadelphia in 1885. There he met Mr Pemberton and mistakenly gave him the recipe. Soon after in 1886, Mr Pemberton changed the name to Coca-Cola and patented the product and process as his own. The Spanish couldn’t do anything.

Good for Pemberton because the US government refused to recognise the original Spanish patent. In fact, in the late 19th century, the US government was offering up to US$50,000 as a reward to anyone who could steal a foreign product or patent.

And too bad for the Spanish firm because in 1953, the American Coca-Cola company sued the Spanish firm for infringing its copyright and beverage. The Spanish firm is still around today. But it is restricted to producing a single alcoholic beverage under their Kola Coca name.

So Mike Pompeo is doing a Coca-Cola on the world today by dismissing China’s claims in the South China Sea as “unlawful” and repeating it till we think that’s the truth.

It is a mess really. In divorces, competing parties will bring up old forgotten incidents against each other.

Likewise, the contesting Southeast Asian countries could go back further in history, to the Neolithic age, to support their claims.

And next week, a descendant of a South American Inca king could approach the Spanish Kola-Coca firm to say that the recipe for their famous 1880 drink was stolen from his ancestors by the Conquistadors.