HomeArticlesMoneyTalksForced to Keep All Together

Forced to Keep All Together

It cannot be easy to manage 1.4 billion Chinese with such rich and ancient diversities. On top of that, you have to counter those outside who wish you harm.

A few days ago, President Xi Jinping told China’s armed forces to “prepare for war” on the back of the mess created by the coronavirus pandemic.

Xi’s speech was probably aimed at the Taiwan re-unification issue, and the national security law about to be introduced to Hong Kong (HK) to control the “pro-democracy” movement. In the past few days, this movement has engineered another spate of violence in HK.

It must be painful for HK residents to go through this, whichever side they support. Certainly, many outsiders find it painful to observe.

The question puzzling us is: since the HK government is not doing a great job of maintaining the peace, why doesn’t China do something about it? There are two main reasons why China has not acted.

In the first place, HK has been the goose that lays the golden eggs for a long time. Before China opened up in year 1978, HK was crucial. There was no better outlet.

In year 2000, shortly before China joined the World Trade Organisation, China’s GDP was only 7 times larger than the tiny ex-colony. Last year, China’s GDP had grown to more than 40 times that of HK. Essentially, until now, it’s not practical to disturb HK as long as the golden eggs are laid.

Secondly, China couldn’t do much anyway without inviting outsize repercussions. When the British left HK in 1997, there were no national security laws left behind to defend against acts of treason, secession, sedition, and subversion against China.

The HK government tried a few times in the last 23 years to come up with such a law. But all attempts were unsuccessful in the face of protests.

But as HK becomes less important to the Chinese economy, and the chaos on the streets of HK has become more than irritating, the thinking must be that it is time to act. That’s why China will impose some national security laws on HK within the next few months. Those supporting the street disturbances could well turn HK the golden goose into HK the roast goose.

When President Xi said “prepare for war” a few days ago, there appears little hesitation that force would be applied to check the HK “pro-democracy” movement. Or any attempts by the Taiwanese at secession.

History tells us that very few secessionist movements are ultimately successful. These movements are rarely about pragmatism and more about fervour. Even with popular support, they seldom have the capability to thrive beyond the actual secession.

There are only limited examples of secessionist success. And they tend to rely heavily on external intervention, as in Bangladesh and Kosovo. In cases such as Eritrea and South Sudan, the parent states were weak and lacked the capability to resist.

China is certainly not weak. Neither does it lack the capability and will to stop HK and Taiwan from misbehaving. True, both HK and Taiwan have the support of other nations. But it is not certain that these nations would engage themselves in a war to prevent China from defending its will.

Then the only downside for China is to be attacked by the unfriendly media for using force to impose its will. Then again, maybe not.

More than 155 years ago, Americans argued over the practice of owning and using slaves as they saw fit.

Americans living in the northern states were mostly indifferent to slavery. That’s because their economies were focussed on industrialisation which relied little on slave labour.

Whereas the southern states had vast agricultural lands and depended heavily on slave labour to manage them.

After Abraham Lincoln, who was anti-slavery, became President in December 1860, the Southerners felt that very soon their way of life would be threatened.

Before President Lincoln was inaugurated in March 1861, some southern states formed an independent nation, calling themselves the Confederacy. The northern states were referred to as the Union.

Slavery was legal then. Even though President Lincoln said he had no plans to abolish slavery in the Confederate states, Confederate forces were unconvinced. They attacked numerous Union forts from April 1861, starting the American Civil War.

The ensuing war dragged on till 2 June 1865, when the last Confederate general, Gen Edmund Kirby Smith and his soldiers, surrendered.

It has been estimated that about 700,000 soldiers and innumerable civilians perished. The war accounted for more American deaths than in all other US wars combined. 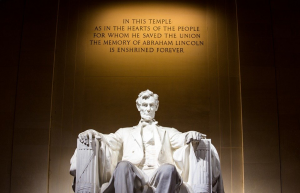 President Lincoln didn’t live to see the official end of the war. He was assassinated two months before its end. To many Americans and many people throughout the world, he is a hero.

He is remembered as one of the greatest US Presidents who kept the United States together and led the nation through its greatest moral, constitutional and political crisis.

All wartime leaders are given the opportunities to make or break their reputations. Circumstances will force them to save the systems they inherited or alter them to make them stronger. They must have many qualities. Above all, they must be ready to use power and to know when and how to use it.

President Lincoln passed this test and gained the admiration of many all over the world. President Xi Jinping will soon be given the opportunity to sit through this test.