Developing countries like Indonesia narrowly escaped an economic crisis recently. Many believe that the Asian Financial Crisis (1997-1998) played a role in steering Indonesia away from another disaster.

In February and March this year, on the back of the coronavirus fears, the Indonesian rupiah fell about 20% against the US dollar, from 13,600 to 16,625 rupiah per dollar. It prompted Indonesian Finance Minister Indrawati to warn that the rupiah could fall as low as 20,000 per dollar before the end of 2020.

Is Indonesia in trouble again? Fortunately, the rupiah isn’t facing the same fragile situation as in 1997. Then, the rupiah’s broad money supply was growing at an unhealthy 25%. Today, it is growing at around a healthy 6%. Furthermore, Indonesia’s foreign exchange reserves are about US$130 billion, considered a comfortable buffer by the IMF.

So it looks like, at least so far, the memories and lessons of the Asian Financial Crisis have guarded Indonesians against over-leveraging their currency positions, and triggering an economic crisis. 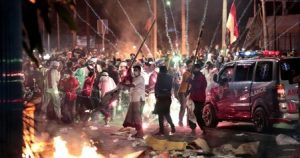 Indonesia in turmoil in May 1998

Because economic crisis brings along troubling problems. In early 1998, the situation deteriorated so badly that Indonesians channelled their anger at their ethnic minorities. There were ugly riots, leading to the resignation of President Suharto on 21 May 1998.

Memories and bad experiences can be good for us. It helps us avoid another similar disaster. That’s why it is good to be reminded of our past mistakes and disasters.

Yesterday (8 May 2020) was one such reminder. It was the 75th anniversary of Victory in Europe Day (VE Day).  It marked the victory over Nazi Germany and the end of World War II in Europe. 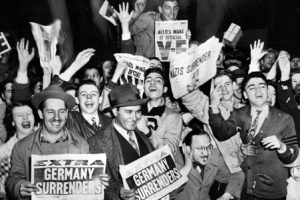 Over 70 million people died between 1939 and 1945. Nobody wants to go through such a disaster ever again. Yet, history tells us that we do repeat our mistakes. When the event recedes far enough into the past, and when the young generation doesn’t remember them, mistakes can be repeated.

For Nazi Germany in the 1930s, the question many ask is how did a sophisticated society like Germany, transform itself into a warring nation? And what made Germans treat other ethnic peoples badly, and subjected them to mass murder?

There are many explanations. Probably one good explanation is the effectiveness of the Nazi propaganda machine in transforming the mindset of ordinary Germans.

At the heart of this is the Volksempfänger, an affordable and extremely popular radio. Everyone wanted a radio then, just like everyone wants a smartphone today. Radio brought news, music, drama and comedy right into their homes. It was introduced in 1933, the year Adolf Hitler was appointed Chancellor of Germany.

Germans listening to their Volksempfänger in 1935

It was no coincidence that Hitler’s Germany saw radio’s potential for transmitting propaganda messages. So it was mass-produced and sold at very affordable prices.

Through radio, Hitler was able to rouse Germans and moved them to do the bad deeds that Nazism is known for. In fact, both sides in the conflict used this simple trick – just repeat the lies and soon the people will believe the lies.

Of course, not all Germans in the 1930s were convinced by Hitler’s lies. They thought his speeches were preposterous and dismissed them. But they kept quiet until Nazism overwhelmed sanity.

With World War II distancing itself further away from us each year, is it possible for our world to stumble into yet another great war? This is possible.

However, one thing is certain. The monopoly of state propaganda of the last great war cannot be assured today, at least in many countries. Hopefully, the popularity of the latest invention of the past decade – smartphones – has diluted the effectiveness of state propaganda.

WhatsApp was launched eleven years ago in 2009. Together with other popular messaging apps and social media channels, different voices and viewpoints can now be heard almost immediately after a state’s propaganda story has been delivered.

If we continue to challenge and doubt such state propaganda, and resist our leaders’ attempts to push us into another war, the day of conflict between nations can be pushed away.

With more awareness of real news, and fake news, we would be as informed and prepared like Indonesians this year. We would be less prone to make the mistakes of the past, even if we have never made, nor experienced them first-hand.