HomeArticlesMoneyTalksInflation Follows When We Print Money

Inflation Follows When We Print Money

Once again, the world’s central banks and policymakers have banded together to print and spend lots of money to revive our sick global economy.

It’s a repeat of the actions taken in the months after Lehman Brothers collapsed in 2008. But this time around, it’s going to be different. Inflation appeared in the years after 2008. This time around, inflation is going to hit us harder.

How much harder inflation hits us will depend on how long this virus stays with us. The longer it stays, the longer will be the global economic shutdown.

A shutdown means no or little economic activity. It also means that all the money and spending so far would not be enough after a few months. In other words, more rounds of money printing and spending must be implemented.

This can only end badly.
After Germany lost the war in 1918, it had to channel all its gold to the Allied victors as war reparations. The German central bank had no choice but to print more German Papiermark to keep its ailing economy going. 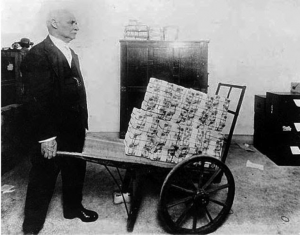 Initially, German consumers did not notice. When consumers started to realise their weakening purchasing power, that’s when prices started to move fast. Between 1921 and 1923, specifically in 1923, the money printing press went into overdrive as wages shot up to compensate for higher grocery prices.

So much paper money was printed and so fast did prices rise that German workers were paid twice a day, in the mornings and in the afternoons. German housewives would collect their husbands’ wages just before lunch to buy groceries immediately. Otherwise, grocery prices would rise before the evening’s wages were paid.

In such a hyperinflation scenario, gold was and is always one of the many winners. Unlike paper money, the quantity of gold is fixed by Nature. When we put the two together, more paper money needed to be exchanged for gold as the chart below shows.

Expectedly, gold prices in the past few years have been moving up in tandem with the frenzied activity of the world’s money printing press. With more money printed this time round compared to 2008 onwards, it is reasonable to expect gold prices to rise above that set a few years ago.

But can it go up to those crazy highs seen in 1923? It depends on when economic activity is restarted. And this depends on our dear enemy the Coronavirus.

The prevailing sentiment is that our dear enemy will be here with us till next year. If that is the case, then gold prices should easily go above and beyond the last peak of US$1,912 an ounce in 2011. 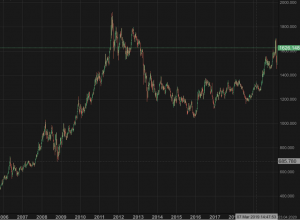 Let’s put on the optimistic hat today amidst all the pessimism. Last week, I mentioned that this virus scourge should be over by this autumn based on my analysis of long term economic cycles. Mind you, such analysis can be misleading and downright inaccurate.

Holding on to my optimistic hat, gold prices can cross US$1,912 this year but are unlikely to shoot up to the stratospheric heights seen in Germany in 1923. But gold prices can still go way up for other reasons down the road. Stay tuned for more stories from this website.