HomeArticlesMoneyTalksIt’s Better to be Lucky and Stupid in Investments

It’s Better to be Lucky and Stupid in Investments

It’s always dangerous for new investors to make too much money too soon. Why? It’s simply because when success comes early, it normally gives the new investors false confidence that they are better than they think they are.

Sometimes, it is better to be lucky and to think that you are stupid.

After Forrest Gump and Lieutenant Dan (from the movie) sold off their shrimp business for a small fortune in the mid-1970s, they reinvested their money in what Forrest Gump thought was a fruit company – Apple Inc.

Assuming they put in US$100,000 into Apple, when it was looking for venture capital funds, that would be about 3% of the company. Today Apple Inc is valued at US$1.238 trillion. Their share of Apple would be worth US$37 billion.

Forrest knew he wasn’t smart. So he left his Apple portfolio alone. New investors who are lucky and think that they are smart will probably take on new and bigger risks with their investments. Many are known to have grown their fortunes even bigger. They become billionaires and are admired by society.

But one day, their luck runs out, as they always do, because no lucky streak lasts forever. It’s probably at the same time when they think their view of the market’s direction cannot be wrong. For instance, they might think that the price of oil will rise. But the price of oil falls and they go bankrupt. 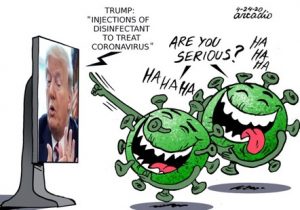 President Trump probably falls into this same category. He was lucky and was born into wealth. He grew his property fortune and was admired by society. But he thinks he is smarter than he is. He refuses to learn and feels that he knows everything.

This week, with full confidence, he said that consuming disinfectant could neutralise the disaster of contracting the coronavirus. To the merriment of everyone, Trump falls into what psychologists call the Dunning-Kruger Effect. 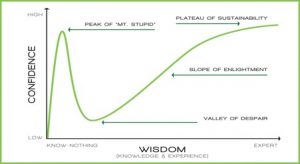 People suffering from the Dunning-Kruger Effect have low abilities and they also overestimate their abilities (Peak of Mt Stupid) as shown in the diagram above. Two psychologists (David Dunning and Justin Kruger) published this Effect in 1999 after a weird incident involving a serial bank robber by the name of McArthur Wheeler.

Apparently, Wheeler thought that by covering his face with lemon juice, the banks’ surveillance cameras would not be able to identify him. He read somewhere that lemon juice rendered his face invisible. When he was subsequently arrested, and very easily, he was shocked that what he read about lemon juice didn’t work.

The reverse of the Dunning-Kruger Effect is also food for thought. People who have some knowledge usually lack confidence (Valley of Despair). But with even more abilities (knowledge and experience), the confidence of these people with abilities would grow (Slope of Enlightenment).

It’s probably unfair to single out President Trump as an example. There are many unknown reasons. But as a high official with all the advisors at his beck and call, why not check with them? Perhaps, like most politicians, they surround themselves with yes-men. And yes-men will never say “No”.